Ralph Greco, a columnist from the blog “Short and Sweet NYC” contacted me after seeing my “Remember the Warriors” Village Voice cover on the newsstands in New York. He was interested in writing a piece on me–about my work as an illustrator, my views on caricature and such. I agreed to it and here is the link to the Q&A interview…thanks for the write up Ralph, and for your interest in what I do!

Posted in Illustration, News and Events

Warriors, come out to play-yayy…. 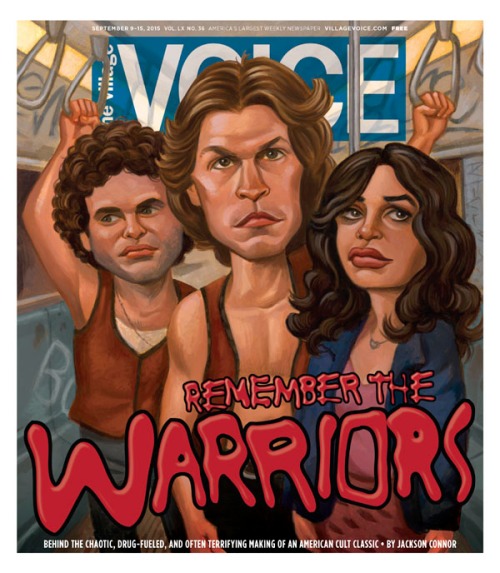 Here’s a cover I did recently for the Village Voice. Featured here are Fox, Swan, and Mercy: three characters from the 1979 movie “The Warriors”. The cover story takes a look back at the making of the gritty New York City street gang film that has become a cult classic. This cover also came out to coincide with a reunion  joining fans and cast members at Coney Island, the Warriors home turf in the movie and the destination they had to reach while fighting through rival gangs who wanted to kill them. I had seen this movie back when I was a teenager, but revisited it again (thanks Netflix streaming) to put myself in the right frame of mind for this assignment. I have to say I’ve developed a new fondness for this flick, hella fun fight scenes and unintentional cheesiness–can yooou dig itt!

Big thanks to art director Tom Carlson for assigning this cover to me. I had done a few jobs for Tom at other publications in the late 90’s and had lost touch with him until I recently friended him on Facebook. Tom remembered me well and gave me this job a week later.